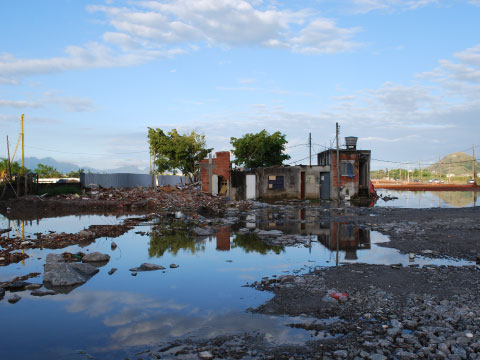 WHO WINS THE MATCH
Compilation Video

Forced evictions due to the 2014 World Cup and 2016 Olympics will affect 1 in 1000 Brazilians, with 250,000 Brazilians at risk of losing, or having already lost, their homes. Since 2011, we have co-produced more than 25 videos, trained 76 activists and supported 6 local campaigns to fight forced evictions committed in the name of development in Brazil. And we've trained someone in almost every Brazilian city that will host World Cup events.

In March, our partner National Coalition of Host-City Networks for a Peoples' World Cup and Olympics (ANCOP) delivered an oral statement during the UN Human Rights Council meeting, urging them to solicit information and press the Brazilian government for explanations regarding forced evictions and other human rights violations in the lead up to the World Cup. ANCOP also launched its new campaign video, World Cup 2014: Who Wins the Match? at a UN side-event in May, which was attended by representatives from over 30 UNHRC member states. Within two months, the video attracted over 140,000 views on YouTube, sparked robust commenting and sharing, and generated significant national and international media coverage.