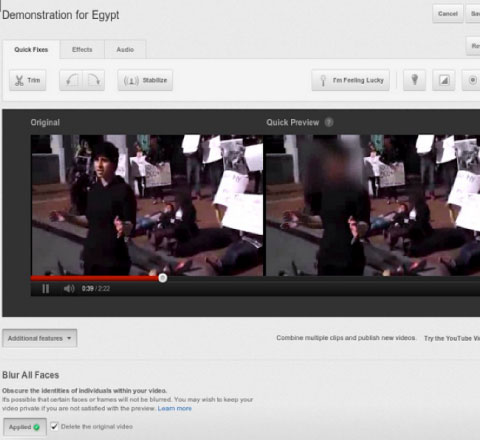 For a number of years, WITNESS has advocated for video sharing platforms to incorporate visual anonymity tools for uploaders. In July 2012, YouTube launched a new tool that enables people to blur the faces within a video before publishing. Read more about it here.

Activists and ordinary citizens captured in footage face numerous risks if that video is circulated online: from being tracked down by repressive regimes to retaliatory attacks. Citizen witnesses to, or survivors of human rights abuses could suffer repercussions if their identity is exposed. By allowing users to pixelate faces within videos then delete the original, un-pixelated version, the YouTube face blur functionality allows people to share video testimony or documentation of human rights violations on the world’s largest video website, while protecting vulnerable people at the same time.