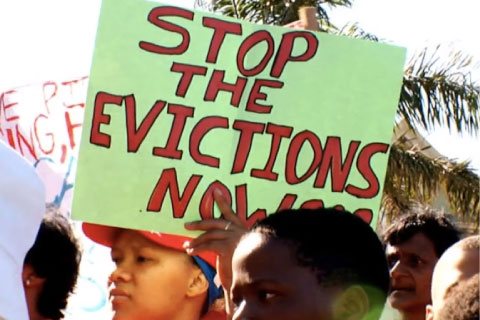 Our video People Before Profit shows the global reach of forced evictions. It's been used by affected communities to connect their local struggles to a worldwide network advancing change.

Our Forced Evictions campaign has helped under-represented people worldwide protect their human rights by sharing their stories with organizations and officials who can make meaningful change.

We produced People Before Profit, which brings together images, testimonies, and stories from footage shot by more than 30 WITNESS partners and allies in 11 countries. The video shows the commonalities and patterns of human rights violations that occur before, during, and after forced evictions around the world, while also highlighting the courageous manner in which affected communities have been fighting, resisting, and rising up to defend their rights to land and adequate housing. People Before Profit has educated local groups on the global context in which their struggles occur and has been an important tool for them to use in challenging eviction cases in court.

In Mexico, we’ve made two videos in conjunction with our partner CECOP (Campaign against the La Parota Dam project) in an effort to halt a destructive dam project, which would directly affect 25,000 people in the state of Guerrero. After showing the first video to the governor of Guerrero and using the second video to drum up support for a petition against the dam, CECOP achieved a significant victory in August 2012 when the governor agreed to stop pushing the project forward. He also committed to organizing a meeting between CECOP and the Mexican president who has the ultimate authority to cancel the project. While this doesn’t mean the project is scrapped for good just yet, it’s an important step forward in cancelling the dam.